Players will learn basic lacrosse fundamentals with very limited body contact, and an emphasis on building skills and having fun.  Game play will consist of small-sided contests on a shortened field to maximize player involvement.  This program will begin in mid-to-late February with indoor clinics offered beginning in January.  Games will run through mid-May.  Practices are twice a week, and games are generally played on Saturdays within the Cincinnati area.

Our third and fourth grade program emphasizes the fundamentals of the full-field game, including passing, catching, ground balls, and teamwork - along with learning the rules of lacrosse and having fun.  Game play will be full sides on a full lacrosse field to emphasize team play and introduce the strategy of the sport.  This level introduces a fuller measure of legal contact.  Practices will begin indoors in January and the season will run through mid-late May.  Regular season practices will be twice weekly, and games are generally played on Sundays within the greater Cincinnati area.

The 5th-6th grade program introduces more positional specialization, refines fundamental skills, and emphasizes an introduction to offensive and defensive strategy.  Players will work to advance their understanding of the full sport of lacrosse while having a great time.  Game play will be full-sided teams on a regulation lacrosse field with an emphasis on attacking and defending principles and midfield play.  This level introduces time-serving penalties and man-up / man-down specializations, with full legal contact.  Practices will begin indoors in January and the season will run through mid-late May.  Regular season practices will be twice a week and games are generally played on Sundays within the greater Cincinnati area.

Our middle school program will focus on developing advanced lacrosse skills while preparing players for high school lacrosse.  Players will learn intermediate-level play sets on offense and defense and the game is played within standard lacrosse rules.  This level represents fully-competitive lacrosse - our emphasis will be on a positive team experience for every player, but playing time WILL vary based on practice- and game-evaluations of each player's skill level and performance.  Practices will begin indoors in January and the season will run through mid-May.  Regular season practices will be three days per week, with games primarily during the week in the greater Cincinnati area.

Each team's season will consist of 8-10 regular league games and one or two 3-game weekend tournaments.

If an age groups hits its max number of players then we will be putting additional registrations on a Waiting List.  No payment is required to join the waiting list; you will pay only if we have a team for you. 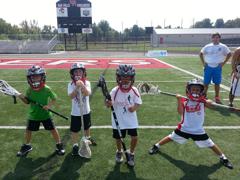